At a Crossroads: Eliminating Human Trafficking

Human trafficking is a shameful scourge on our society and the largest-grossing black-market crime after weapons, and before drugs. Like weapons, and unlike drugs, trafficking victims can be used more than once. According to the UN Office on Drugs and Crime, there are an estimated 2.4 million human trafficking victims trapped in modern-day slavery as sex workers and forced labourers.Human trafficking penetrates every major industry—construction, agriculture, food processing, fashion, domestic services, hospitality, and others. In this illicit $32bn industry, men and women are stripped of their freedom. Their passports are confiscated and they are forced to work for marginal remunerations to pay off debts for travel, food, and lodging. Trafficking is a human rights violation on many fronts—the Universal Declaration holds that “all beings are born free and equal in dignity and rights,” “Everyone has the right to life, liberty and security of person,” and “no one shall be held in slavery or servitude; slavery and the slave trade shall be prohibited in all their forms.”

Beyond the individual human rights abuses that are born by trafficking victims, human trafficking also takes an economic toll on our society. When survivors escape, they may feel both psychologically and physically broken. Many victims face difficulty reintegrating in their society or in the nation where they have been relocated. If survivors are not rehabilitated, they cannot reenter the workforce and successfully provide for themselves or lead a life of dignity. If survivors cannot access the services they require, they remain vulnerable to being trafficked again.

Two major anti-trafficking measures—the UN Convention on Human Trafficking and the Council of Europe’s Treaty on Human Trafficking—are in place in a number of countries. Almost every country in the world has national laws that criminalise trafficking in persons. Both governments and NGOs are pouring money into public awareness campaigns to educate the global citizenry, and training programmes for law officers, medical professionals and public transportation workers. But the devastation of human trafficking persists.

While incredible amounts of money are invested, there have been shamefully few prosecutions. Furthermore, of the small number of cases brought to the courts, there is not a very high conviction rate. The June 2014 Trafficking in Persons Report established that while there are millions of victims worldwide, only 9,460 prosecutions were reported in 2013. Of the 9,460 reported prosecutions, only 5,776 resulted in convictions, and a mere 470 of those convictions were for labor trafficking.

We have to ask ourselves, why are we spending all this money and not obtaining enough convictions? Why are so many traffickers operating with impunity? We know what we are doing operating in this anti-trafficking space, and we have been doing it for too long without seeing results. We need to focus on measuring what is happening; NGOs must assess and share best practices. With so many entities focused on combatting human trafficking, if we do not harmonise efforts and work together, we risk wasting valuable resources.

In addition to harmonisation, national governments need to adopt more comprehensive legislation. Governments should institute laws that protect victims of trafficking so they may seek justice without fear of reprisal. In the United Kingdom, there are “Special Measures” available to “vulnerable and intimidated” witnesses providing evidence. However, not all victims of trafficking are eligible for these protections, and eligibility does not automatically confer a grant of these special measures. The United States Trafficking Victims Protection Act (TVPA) is another example of a national law designed to protect victims. The TVPA is comprehensive in its aim to “protect of victims of trafficking by creating a bill of rights for victims, including the right to medical care, shelter, restitution, civil remedy, residency status, work permit, access to information.” The TVPA also supports prevention and prosecution initiatives.

By May 2015, the British government is expected to pass a comprehensive law that will better prevent trafficking and aid victims. The Modern Slavery Bill was introduced in the House of Commons on 10 June 2014, and would provide for the non-criminalisation of victims, victim assistance and support measures, reform of the National Referral Mechanism, personal corporate responsibility for company supply chains that involve trafficked persons, asset recovery, and expansion of “special measures” to all victims of modern slavery testifying in court.

Human trafficking is not a men’s issue or a women’s issue but a humanissue that traverses political divides in all countries. We are at a crossroads and better enforcement mechanisms, as well as improved harmonisation efforts, are needed to successfully combat trafficking in persons.

Baroness Mary Goudie is a senior member of the British House of Lords and a global advocate for the rights of women and children. She is involved in promoting gender equity with both the G8 and G20, and chairs the Women Leaders’ Council to Fight Human Trafficking at the United Nations. Through her extensive philanthropic work, she has been involved in training and promoting women political and business leaders. She is a member of the Board of Directors of Vital Voices Global Partnership, a founding member of the 30% Club steering committee and a trustee of the El-Hibri Charitable Foundation. She also serves on the Board of Directors of EuropEFE – the European Mission of the Education for Employment Foundation based in Spain, and is a member of the UK Board of Directors for the Center for Talent Innovation. 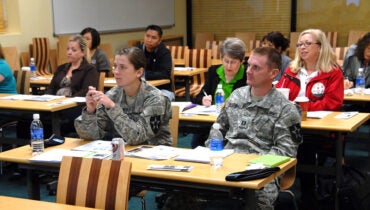