The Georgetown Institute for Women Peace and Security hosted a symposium at Georgetown University on the intersection of climate change, conflict and gender, co-sponsored by Trinity College in Dublin.

Former Irish President Mary Robinson joined 25 academics, practitioners and policymakers from a number of countries, including the Democratic Republic of the Congo, Kenya, and Costa Rica at the symposium, which was supported by Nicolaus and Christiane Weickart. See some of their key insights from the symposium below. 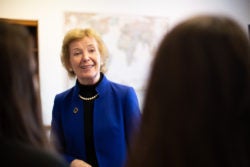 “I’m really worried that climate change is going to be so severe over the coming years, no matter what we do—we’re not on course for a safe world. Even if we change now, we’ve done a lot of damage. It’s disrupting livelihoods, it’s driving people out of their homes, and it’s going to exacerbate and further threaten conflict and fragile states. So it’s really important that we link these three issues and that we understand what women are doing on the ground to build resilience.” – Mary Robinson, Former President of Ireland 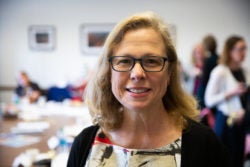 “Climate change is going to affect everyone, but it doesn’t affect everyone equally. Women are already being displaced and adversely affected by climate change all over the world, and also by conflict. They’re both some of the most vulnerable people, but also, they’re the decision makers often for their families. And if you make women’s lives better, you improve the lives of everyone. While my work tends to be more on climate than on women’s issues, I think it’s really important to lift up women’s voices, and I think it’s very important to have women at the table because we need all hands on deck.” – Vicki Arroyo, Executive Director, Georgetown Climate Center 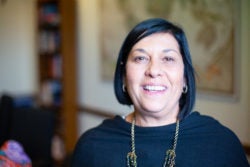 “Considering conflict, climate change, and gender separately provides no solutions to what we need in the South. It is in our communities, it is in our countries, in which you see that looking at climate change only from one side, or conflict on its own track—it’s impossible. The reality brings them together. And we need integral solutions to what we’re facing.” – Lorena Aguilar, Vice Minister of Foreign Affairs, Government of Costa Rica 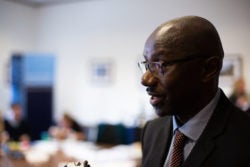 “Actually the issues are very interesting, especially in Africa, in my country, where there is a lot of competition, over the land, over the natural resources. And especially because of the poverty that has affected women and children because of the armed conflict, and because, also, of the lack of empowerment of the women… These three topics fit together because gender has become a crosscutting question for all the countries, especially in Africa and in my country [Democratic Republic of the Congo]. We need to understand better how to take this question into account when drafting and implementing policies, which will continue to affect especially women and young people.” – Charles Mushizi, Node Coordinator, FANRPAN, DRC 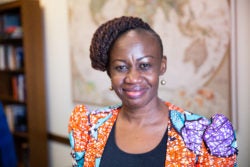 “Today, coming here to Georgetown University, is very important for me, because it gives me a platform, to talk to the world and to give them the real issues and the case studies, which are happening on the ground. And it’s really amazing, and interesting, to see women and people working on gender from all around the world at the policy level and also at the local level. And for us to come up with some uniform voice on certain issues that we have to do at the international level, at the national level, and also on the local level.” – Nancy Omolo, Gender Inclusion and Climate Change Advisor, Government of Kenya 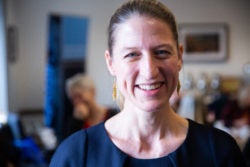 “I think we just need a call for political leadership on these issues. I think we, you know, we’ve talking here about the importance of policy frameworks, and integrating this into that, and putting more gender into this. But really, what I would just call for is that we already have so many policy frameworks and so many decisions around this, and really what we need is leadership on actual implementation of some of this and enforcement. And that also goes with financing, and what we’re seeing is a lot of fragmentation around financing these issues. And we really need more countries to take the mantle of, kind of, feminist approaches to climate and security, which we’re missing.” – Silja Halle, Program Officer, UN Environment 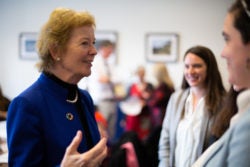 “As a graduate student and research assistant at GIWPS, I study the relationship between women and conflict. Climate change has emerged as another dimension in this relationship. Women are adversely affected by both climate change and conflict but are consistently left out of the management of natural resources and the decision-making process on climate action. It is inspiring to sit in a room of esteemed practitioners, policymakers, and researchers who bring together diverse ideas and propose solutions or new research at the nexus of this relationship.” – Devin Olmack, M.A. Candidate ’20 (pictured second from right) 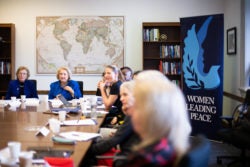 “This applies to the substance of the discussion, as well as to who is in the room,” she explained. 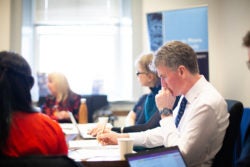