Bserat Ghebremicael (B’17) is an advocate for women and girls caught amid armed conflict in Tigray, Ethiopia. Bserat’s advocacy is informed by her experiences at Georgetown, her day job at Google, and her work with the nonprofit Omna Tigray.

Over the last six months, thousands of people have been killed and over a million forced from their homes during the armed conflict in the Tigray region of northern Ethiopia. Women and girls are being brutally targeted with sexual and gender-based violence during the conflict, and U.N. humanitarian affairs and emergency relief chief Mark Lowcock declared that sexual violence is being used as a weapon of war.

We asked Bserat to tell us about her connection to Tigray and her efforts to raise awareness about the dire situation. 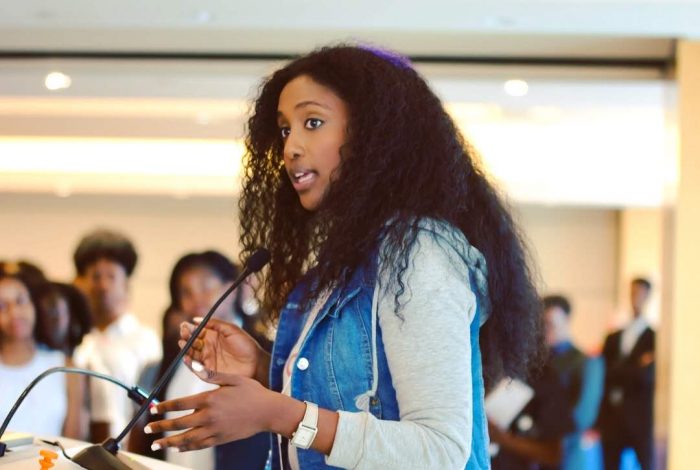 Pictured above: Bserat speaks to a group of Black college students from across the United States about the role of Black consumers and employees in technology.

Q: Tell us about your connection to Tigray.

A: I’m proudly a Tigrayan woman, born and raised in the United States. My parents were both born in Tigray, and immigrated to the U.S., and my entire extended family lives in Tigray. I’ve been to Tigray only twice in my life, once in 2000 and once in January 2020, 10 months before the war began.

With regards to the war on Tigray, I became more involved when I saw early reports of ethnic profiling and extrajudicial killings of civilians, amidst the communications blackout that prevented many of us in the diaspora from talking to family members in the region for months. As the war progressed, I soon realized it’s much bigger than just my family alone. A state-led and state-sponsored genocide is being committed against the people of Tigray. In this genocidal campaign against Tigrayans, Ethiopian and Eritrean forces and Amhara militias are committing ethnic cleansing (according to US Secretary of State Blinken), weaponizing rape with intentions to prevent birth or cleanse a bloodline, and weaponizing starvation.

I continue to stay involved now with a clear objective to advocate for an entire ethnic group of over seven million Tigrayans and their rights to self-determination.

Q: Tell us about your work to support women and girls in Tigray.

A: I lead marketing for Omna Tigray, which is a registered non-profit founded in response to the ongoing war waged on Tigray. We focus on educated advocacy and, post-war, economic development.

Omna Tigray has been driving action-oriented campaigns both on Twitter and via petitions that call for an end to weaponized sexual and gender-based violence (SGBV) against Tigrayan women and girls; the withdrawal of Eritrean and Ethiopian troops and Amhara militias out of Tigray; unhindered and unrestricted humanitarian access to all of Tigray; and UN-led and UN-only independent investigations into all atrocities, including SGBV war crimes.

We’ve supplemented our campaigns with informational slide decks, stories documenting experiences by Tigrayans, and events hosted on various platforms, including the newest social platform, Clubhouse. We have also worked alongside journalists to amplify the traumatic stories of weaponized SGBV, and recently created a video featuring Tigrayan women in the diaspora that acknowledges the pain and horror, but also the resilience and rebellion, of the women and girls in Tigray.

Q: How did your time at Georgetown’s McDonough School of Business (MSB) help prepare you for your work to support women and girls in Tigray?

A: Georgetown helped me define systems of oppression and taught me that mobilizing people and getting into good trouble, as the late Congressman John Lewis would say, can produce positive outcomes, even if only incremental. From an MSB perspective, I learned to take a leap and lean into my creativity more, which led to the creation of several initiatives—including co-founding the BRAVE Summit, an event that celebrates and provides opportunities to Black women, that still exists now five years later. This led to a variety of skills, including raising tens of thousands in funding and building relationships with students, faculty, and leaders across the university.

Since my time at Georgetown, I’ve increasingly invested my time, energy and resources into Black women across many settings — at Google, external communities in the U.S., and now, a more devoted focus to Tigrayan women and girls. 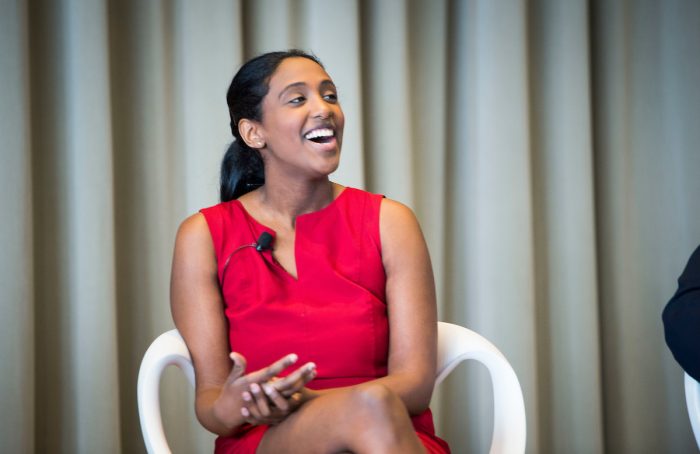 Pictured above: Bserat speaks on a panel for Georgetown’s Scholarship Day.

Q: Are there synergies between your day job with Google and the Black Googler Network and this advocacy work?

A: My core work is within the apps and gaming space at Google, supporting small and medium-sized businesses in their growth, and I’m also entering into my third year with the Black Googler Network, now in Global Leadership. Though the practice may differ, there are three main principles I’ve learned from Google that help me in the work I’m doing with Omna Tigray: 1) do the right thing, 2) focus on the user, and 3) move quickly but with intention.

The first I take as a call to stand firmly with the people of Tigray—there’s only one side to be on when it comes to genocide and there’s certainly no justification for it. Focusing on the user in this instance means centering Tigrayans in the region and their voices in any actions we call for and any initiatives we drive. Ultimately, I don’t live in Tigray, and the people there know what’s best for their livelihoods, so I align with their voices. Lastly, what I’ve learned is, sometimes, you just need to take intentional actions being 60-70% of the way there, and figure things out along the way. In the context of what is happening in Tigray, we can’t afford to wait.

Q: You were involved with a recent Georgetown Institute for Women, Peace and Security event on the Tigray conflict. Why was this event important?

A: First, I want to acknowledge and stand behind the Tigrayan woman whose recorded story of being raped and impregnated by Ethiopian soldiers was shared with her permission at the virtual Georgetown event. Reliving that trauma while likely still traumatized speaks to her commitment in protecting more Tigrayan women and girls from weaponized rape and her pursuit in justice for survivors.

At this point, I have not heard of one Tigrayan whose loved ones or friend’s loved ones haven’t been killed. Considering the stigma in reporting, rape cases are also likely significantly higher —the EEPA shared a conservative estimate of 10,000 rape survivors in March. As Fanaye Solomon, who spoke at the event, mentioned, concerns are not going to protect women and girls from weaponized rape. Concerns are not going to protect an entire ethnic group. Although Tigray feels so distant, these are human beings we’re talking about, and in the ways the world is increasingly championing Black Lives Matter, it should always be remembered that all Black Lives Matter, everywhere. The event stood as a call to action, and with increasing reports of killings and sexual and gender-based violence, Tigray truly cannot wait. 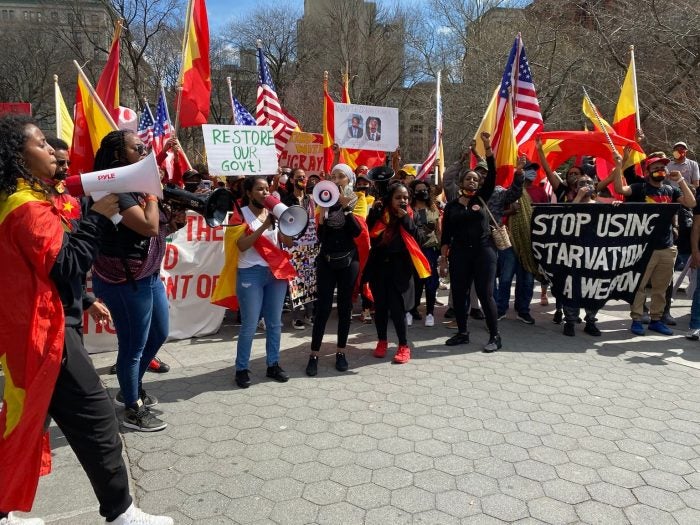 Pictured above: Tigrayans from across the U.S. gathered in to New York to hold a protest calling for an end to the war and its war crimes, specifically addressing the Biden-Harris administration and the United Nations.

Q: What can people do if they feel compelled to do more for the women and girls of Tigray?

A: To end the atrocities happening to the women and girls of Tigray, I ask everyone to raise awareness, contact your elected officials, educate yourselves and stand as allies. Omna Tigray hosts various action-driven awareness campaigns and petitions that you can keep up with by following us on social media platforms: @omnatigray on Twitter, Instagram and Facebook. Reaching out to your elected officials is extremely important to drive the political action needed to address the humanitarian crisis and war crimes. You can head to our website, omnatigray.org, for a topline and more in-depth list of our asks to elected officials. Lastly, Tigrayans make up only 6% of the total population in Ethiopia, and the Tigrayan diaspora can’t do it alone. We need more allies and partnerships — at an individual and organizational level, private sector and public sector — to stand with Tigrayans and help us put an end to the suffering of women and girls, and all civilians, of Tigray. No matter how big or small, each action we collectively take matters.

It’s been six months of witnessing the atrocities happening to the people of Tigray. As a Tigrayan, as a Georgetown graduate, and generally as a human being, I call on the Georgetown community, the wider international community and world leaders to take action centering the people of Tigray now, rather than sharing condolences later.

Bserat Ghebremicael (B’17) leads marketing for the nonprofit Omna Tigray, supports growth of app and gaming businesses at Google, and sits in global leadership of the Black Googler Network.

This interview was edited for clarity by Allie Smith, Program Manager at the Georgetown Institute for Women, Peace and Security. 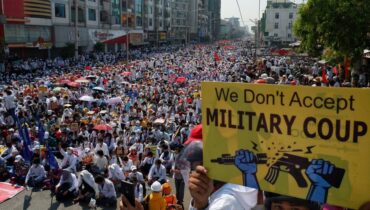 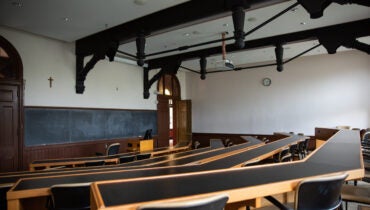 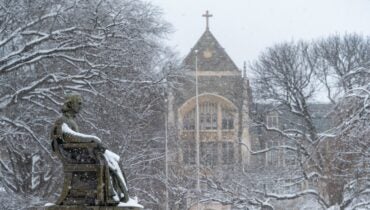