Political violence against women: A case from the Central African Republic

Sitting at her desk with the Central African flag behind her, Beatrice Epaye’s sustained gaze hints at courage and determination. And she has both in quantities. While running for a parliamentary seat in the December 2020 election, she recalls the many physical and verbal attacks and threats she faced as a woman.

“It is our right to sit at the decision-making tables, not just around them. Last elections showed us that we still have a long way to go,” she nods. “Many more women [than men] are attacked during an election campaign,” says the MP and women’s rights advocate.

Violence against women is clearly a deterrent to their involvement in politics, pushing many of them out of political activities and muting their voices. According to an Expert Group Meeting from 2018, 44.4 percent of women in politics surveyed across 39 countries in 2016 reported having received threats of death, rape, assault, or abduction. One fifth said they had been subjected to sexual violence. But the severity of this matter is perhaps greater as violence against women tends to be under-reported, and crimes unpunished.

UN peace operations are working to mitigate and prevent violence against women and support protection efforts to ensure women’s participation in their country’s peace processes. This has become even more urgent as COVID-19 has exacerbated gender inequalities and increased violence against women.

Over recent decades, persistent social and political upheaval in the Central African Republic (CAR) has wrought particularly negative impacts for women and their participation.

It is reported that 80% of women in CAR have experienced sexual and gender-based violence (SGBV). Women involved in the peace process and the political sphere are not exempt from this statistic. In fact, they are targeted because of their participation. According to UN Women, many candidates — women in particular — were threatened, robbed and even physically assaulted in the last CAR election cycles. 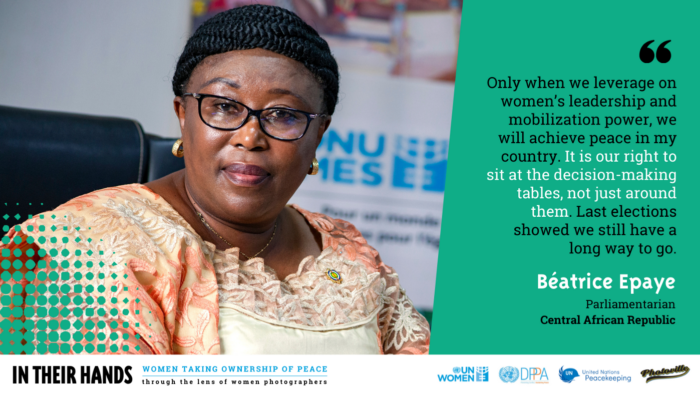 “Why is it that women are not among men to decide the future of the country?” she asks. To exclude women is to exclude roughly half of the population, putting peace efforts and democracy at risk. To address this, the peacekeeping mission in CAR, MINUSCA, has been implementing new ways of redress and fostered innovative partnerships with local women, such as Beatrice.

In the recent legislative and presidential elections in CAR, MINUSCA, with the support of UN Women, supported women organizations in establishing 16 women’s situation rooms and a 24-hour hotline. These efforts helped enhance women’s protection through tracking and reporting risks, threats and incidents of violence against women. Beatrice utilized this hotline after she was targeted and assaulted for her political engagement. Peacekeepers “arrived luckily to root out the attackers around me,” she recalls. “They continued to patrol and monitor threats.”

MINUSCA also provides support to ensure women are at the center of the peace processes at all levels. “I was working with MINUSCA on local peace agreements. Together, we were able to talk to the armed groups so they would sign a ceasefire agreement among themselves.” In essence, such innovative partnerships, also called for in the Secretary-General’s Call to Action to peacekeeping partners on women’s participation in peace and security, are critical to prevent violence against women.

Effectively this approach has helped strengthen women’s participation. Beatrice is now joined by 17 other women in the Parliament, up from 11 in the previous parliament. The number of women engaged in the Local Peace and Reconciliation Committees in CAR has reached 50 per cent. Beatrice and her colleagues are determined to continue strengthening women’s participation and prevent violence against women. “We are not giving up. We have created a Women Parliamentarians Forum…Together we will work in the Parliament to vote for gender-sensitive laws”.

The collaboration between peacekeeping missions and local women leaders on the ground continues to prove gains but more support is needed to ensure these efforts can continue to meet the challenges that come with changing times in CAR and other peacekeeping contexts.

Local women are on front lines battling for their full, equal and meaningful participation. Although the fight is long from over, the persistent strength of women like Beatrice is a sign of momentum. “Our lives are at stake, but we have not given up. The proof? I am still here.”

Learn more about other women leaders and peacebuilders working to advance peace in their countries, supported by UN Peacekeeping, through the In Their Hands exhibition.