Profiles in Peace: An Interview with Mary Robinson

The Honorable Mary Robinson is the founder and president of the Mary Robinson Foundation – Climate Justice and serves as the UN Secretary-General’s Special Envoy on Climate Change. She served as the first female President of Ireland from 1990-1997 and United Nations High Commissioner for Human Rights from 1997-2002, and is a global leader on issues of women’s empowerment and human rights. Rebecca Turkington sat down with her in July of 2013 to discuss climate justice and the role of women in building peace.

Rebecca Turkington: The DRC conflict so often becomes synonymous with sexual and gender-based violence, and we very rarely hear the stories of women who are working as agents for peace process. Could you talk a little bit about the roles women are playing in peacebuilding and the ways you are engaging women and women’s organizations in the peace process, particularly your recent conference in Burundi.

MR: I’ve benefitted from the experience over the years of seeing what women are doing on the ground. In peacebuilding and peacemaking, and of course in Northern Ireland, in my own country, it was women who came out from the housing estates and met each other and said “We have to stop this killing and knee-capping and destroying the future for our young people.” So, I was aware of a lot of work being done on preparing women through the Security Council Resolution 1325: that women should be at the table, women should be in decision-making, etcetera. So when I got this responsibility, I wanted, as the first woman Special Envoy appointed by the UN (they made that point to me), I said, well, that means I’m going to do it differently. And I’m not going to just talk with leaders, heads of state, ministers, negotiators; I’m also going to have a bottom-up approach.

“They’re not responsible for the greenhouse gas emissions, and, yet, they’re the worst affected. That brought me to a notion of climate justice, which links climate and development, and which also has ideas about solutions.”

RT: I’d also like to ask you about some of the other work you’re doing now with the Mary Robinson Foundation. Usually climate change is seen as an environmental issue, and I find it fascinating that you’re coming at it from a perspective of climate justice and human rights. I was wondering if you could speak a little bit about the intersections you see between climate change and the women, peace and security agenda.

MR: I came to the issue of climate change not as an environmentalist or a scientist or a specialist, I just saw it on the ground in the African countries I was working in when I was heading up Realizing Rights. Because we were looking at right to food, safe water, health and education, and I described what I call the “ah, but” sentence. My friend Constance in Northern Uganda would say to me, “Mary, when I was growing up, we were poor, but we had food, because we had predictable seasons. And, you know, things were okay. But for the last ten years,” that would have been in about 2008, she was saying that, “For the last ten years, we have had a complete change in our weather pattern. We now have long periods of drought and then we get flash flooding. It’s destroyed the school.” And she actually formed a women’s group to cope with that.

I hear this all over the world, weather conditions in vulnerable countries because they’re hit first. Where’s the justice in that? These are not people who drive cars, who use oil or gas or coal. They’re not responsible for the greenhouse gas emissions, and, yet, they’re the worst affected. That brought me to a notion of climate justice, which links climate and development, and which also has ideas about solutions. We have a world that’s so unequal that 2.6 billion out of the 7 billion in the world cook on open fires, ingest fumes that hurt, cut down trees to do that, and we need to have them have access to clean cookstoves.

“My definition [of peace and security] is broad, and it includes an enabling environment for potential, it includes equality, it includes participation, it includes voice, and it, in particular, takes away that fear of the gun, of the having to flee with your families, all the things that are associated with the negative aspects of undermining peace.”

MR: I would say that it’s certainly not just absence of violence, we all know that. It’s much more, it’s an enabling environment. When I ask poor women in a village what human rights means to them, the answer I get is, more or less: access to water, freedom from violence. What I like about what’s happening now in the Great Lakes is, thanks to a joint visit of the Secretary General and the President of the World Bank, we’re talking about peace and development together. I’m not going to try a word definition – there are plenty of good definitions out there – but my definition is broad, and it includes an enabling environment for potential, it includes equality, it includes participation, it includes voice, and it, in particular, takes away that fear of the gun, of the having to flee with your families, all the things that are associated with the negative aspects of undermining peace.

MR: Climate change is becoming one of the worst threats to human rights because it’s undermining food, it’s undermining water, it’s causing people to have to move from their homes in very dangerous situations. It’s predicted that by 2050, that’s thirty-seven year’s time, we could have 200 million climate-displaced people. We have no regime for them, they don’t come under refugees. So, I think it’s because it’s aggravating all the situations in the fragile and vulnerable states that are already affected. It’s the additional pressure that we’re not taking seriously. And there’s both the immediate climate justice and there’s the intergenerational justice.

Produced with support from Mara D’Amico and Laura Fairman.

Rebecca Turkington is a Program Manager at the Georgetown Institute for Women, Peace and Security. She holds a BA in International Relations/History from Wellesley College, and is currently pursing a MA in Security Studies at Georgetown University, concentrating in terrorism and substate violence. Prior to joining the Institute in 2013, she worked on women’s political participation at the National Democratic Institute, the Women in Public Service Project and Moroccan Ministry of Interior. 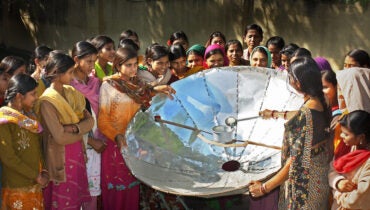