Undergraduate and graduate students at Georgetown help measure women’s inclusion, access to justice and security across the globe.

Elena Ortiz (SFS’21) and Bryan Haiwen Zou (G’20) are among several Georgetown students who played a role in the latest rankings of women’s well-being in 167 countries, created by the Georgetown Institute for Women, Peace and Security (GIWPS) and released at the United Nations.

Ortiz served as lead student research assistant for the Women, Peace and Security index, which is featured in National Geographic’s November magazine.

“Especially for countries that have stagnated or fallen in the rankings since 2017, I hope this year’s results put pressure on them to step up their game and prioritize gender equality at the top of their national agendas,” Ortiz says. “I walked away with not only a new set of skills, but also confirmation that the field of women, peace and security is where I want to be permanently.”

Best and Worst Countries for Women

The index draws on recognized data sources to measure women’s inclusion, access to justice and security.

“Data is never just figures and numbers – it tells us the stories of real people, women and men, girls and boys,” said Mona Juul, Norwegian Permanent Representative to the United Nations at the index launch event in October 2019.

“No country can study the WPS index and be content with their current status. We all have homework to do,” added the ambassador, whose country ranks first on the index.

Zou, a master’s student in economics from Ganzhou, China, created data visualization and analysis for the index report.

“I came up with new ways to present the data using Excel (and statistical computing software) Stata and R,” he explains.

Zou says his work on the index complemented the data analysis and programming he’s learned in his economics classes at Georgetown.

The statistics in the WPS Index provide powerful insights about the global state of women, he says

“Some things that we take for granted, such as education, cellphone use and legal protection may not be accessible to women living in conflict-affected and fragile states,” Zou explains. “It motivates me to conduct further research regarding gender-based discrimination.”

“Working on the WPS Index was my first introduction to a longer-term research project,” says Ortiz, who supported a research team led by Jeni Klugman, GIWPS managing director.

A junior international politics and security major, Ortiz researched countries that improved most on the WPS Index since the first edition in 2017, and made comparisons of legal discrimination in India, Iran and Brazil.

Ortiz is now studying abroad in Rwanda, where she will conduct her own field research for the first time.

She plans to conduct interviews and surveys to measure the gaps between legal gender equality in principal and perceptions of gender roles in practice.

“Rwanda’s constitution has some of the world’s most progressive provisions protecting gender equality,” Ortiz says, “but the extent to which local perceptions have caught up is what I’m after.” 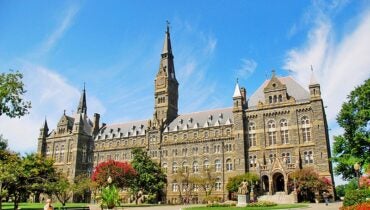