In both the United States and China, record numbers of women are becoming entrepreneurs. The upward trends in both countries underscore the growing economic opportunities for women in the entrepreneurial ecosystem, especially in the rapidly changing technology industry. However, despite the availability of national data highlighting these trends, we know little about the patterns of opportunities and challenges faced by women entrepreneurs, specifically those in tech.

In our latest report, the Georgetown Institute for Women, Peace and Security (GIWPS) partnered with the Mulan Foundation to ask standout women founders about their experiences navigating the male-dominated worlds of tech industry start-ups and venture capital fundraising. The following excerpts highlight responses from women entrepreneurs in America. To explore the survey responses and analysis of women’s access to financing, mentorship, and government support, read our study: “Lessons Across Borders: Women’s Entrepreneurship in the U.S. and China,” by Yvonne Quek and Emma Crawford. 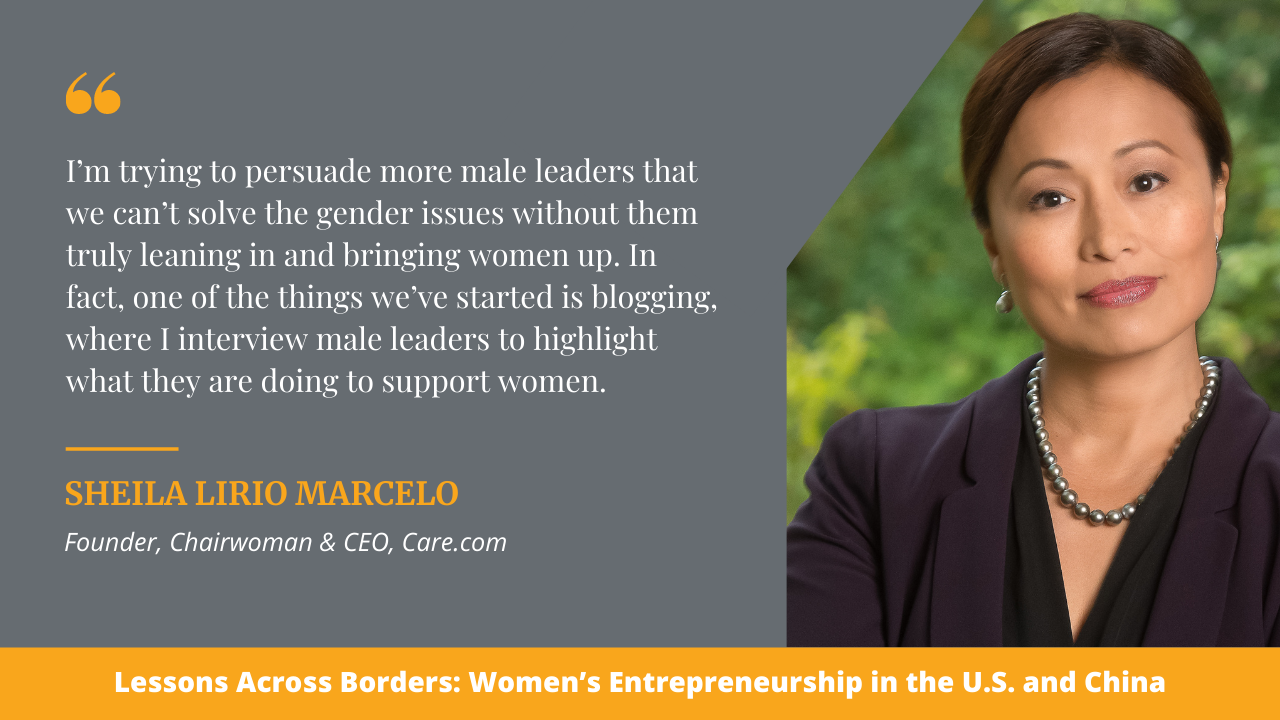 In 2006, Sheila Lirio Marcelo founded Care.com, the world’s largest online destination for finding and managing family care, serving more than 32.9 million members in over 20 countries. The service enables families to search for, qualify, vet, connect with, and select caregivers. It also provides caregivers with solutions to create personal profiles, describe their skills and experience, and otherwise differentiate and market themselves in a fragmented marketplace. It is a publicly listed company on the New York Stock Exchange.

GIWPS: Do you think the legal, social, and economic environment is supportive of women entrepreneurs in tech? Have you seen changes over time?

Sheila: With the corner-office leadership still 85 percent men, it would just take too long if it were just up to women. That applies to governments, nonprofits, and companies. I’m actually going to events with more male audiences because I’m trying to persuade more male leaders that we can’t solve the gender issues without them truly leaning in and bringing women up. So, in terms of the legal, social, and economic environments, I still don’t think there is enough happening there. In fact, one of the things we’ve started is blogging, where I interview male leaders to highlight what they are doing to support women. Because sometimes they are shy about it—they feel either embarrassed about it or worry that they will say the wrong thing. So I’m trying to say, “The more you show off, the more this will encourage other male leaders to follow.” 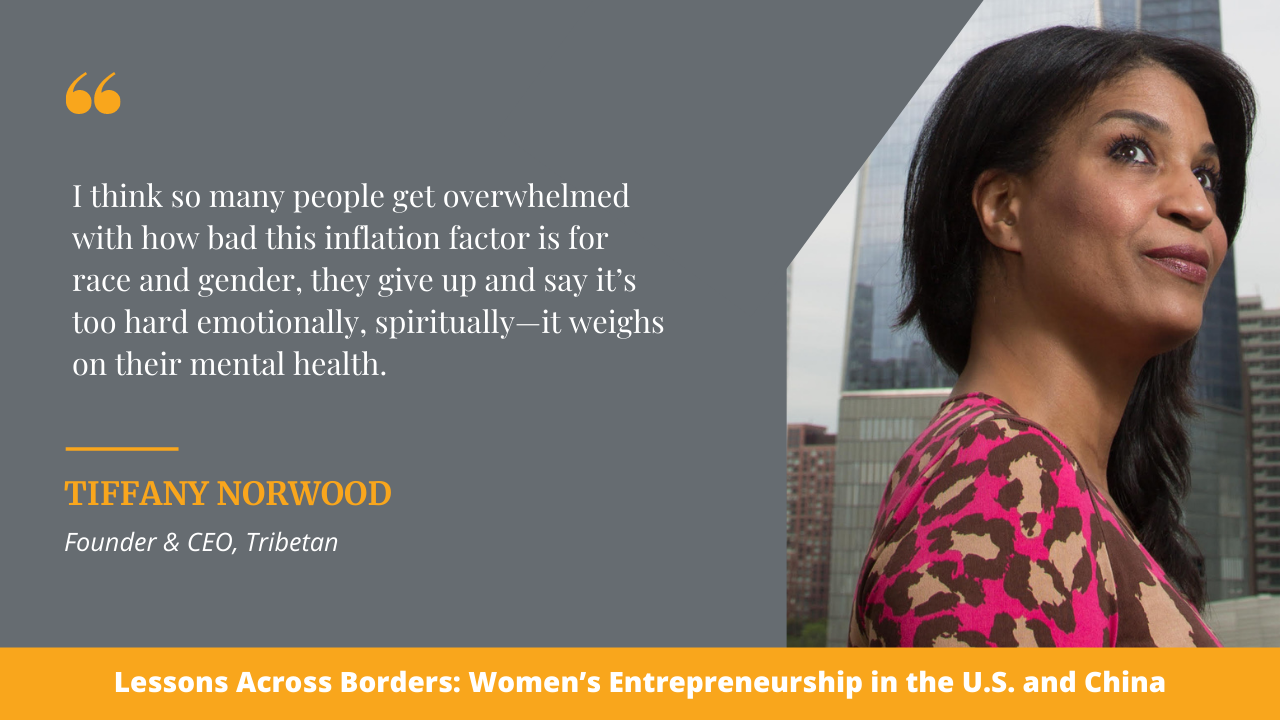 Tiffany Norwood is a global serial entrepreneur whose career spans thirty years, seven start-ups, two public offerings, and over 50 countries. She started her first start-up as a teenager and had a patent by the age of 23. Her ventures ranged from the first one-strap backpack, to the automation technology behind self-install kits for broadband internet, to a virtual-reality gaming platform today. In her late twenties, she raised $670 million to fund the first ever global digital satellite radio start-up, WorldSpace, which included XM Radio for the United States. Currently, Tiffany is the founder and CEO of Tribetan, an ed-tech company that teaches everyone the entrepreneurial and innovator skill sets.

GIWPS: Over the years, you’ve been very active as an entrepreneur in the technology field. Were there specific barriers that you faced, being a woman starting all these businesses over the years? What changes have you seen?

Tiffany: If you’re a white male and you’re doing a start-up, it’s hard. Then if you’re a woman, there’s sexism, stereotyping, and unconscious bias. I feel most people jump out of the race because of that. Say you’re trying to raise $100,000 and a guy has to go out and do 100 pitches to get that $100,000. As a woman, you might have to do 250 pitches. And as a man of color, you might have to go out and tell the pitch 400 times, and then as a woman of color 1,000 times. I think so many people get overwhelmed with how bad this inflation factor is for race and gender, they give up and say it’s too hard emotionally, spiritually—it weighs on their mental health. For me, it wasn’t Cornell and Harvard that allowed me to win. It was that I decided that I was going to be the one to show it was possible, no matter what the cost for me personally. 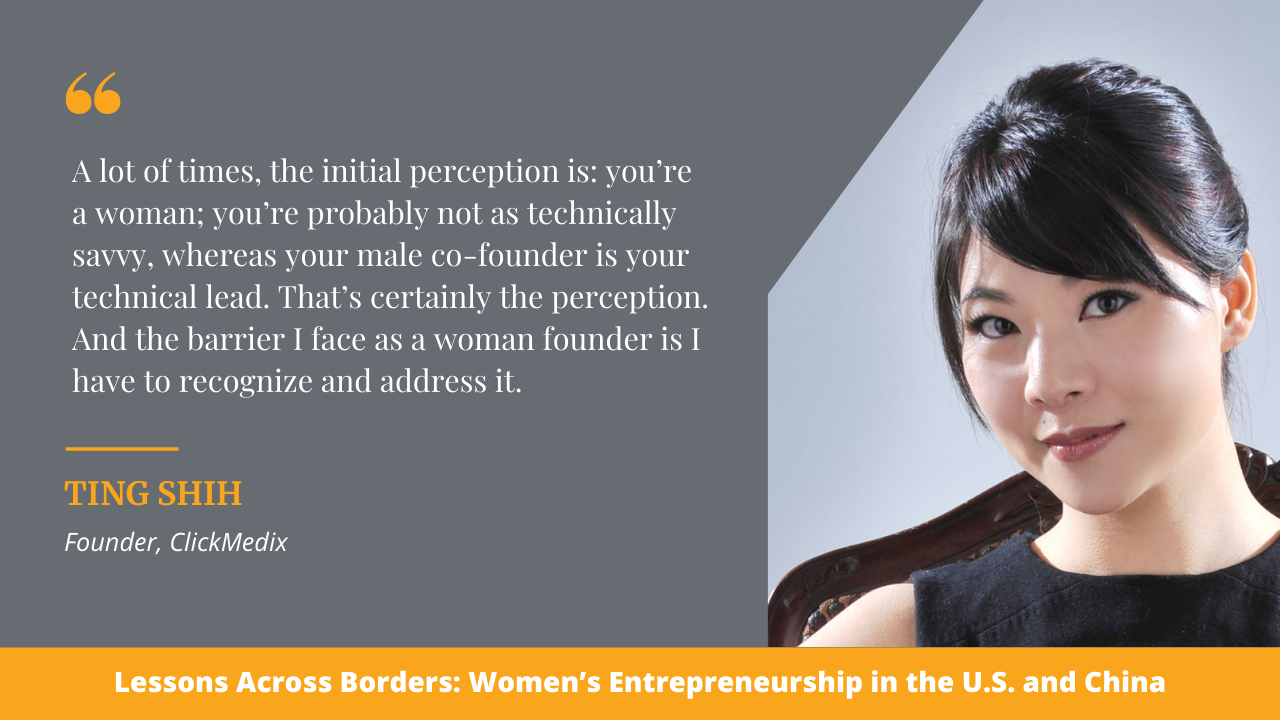 Ting Shih founded ClickMedix, an award-winning health-care technology enterprise to enable health organizations to serve more patients through its mHealth platform. She has implemented mHealth programs across 21 countries, improving the lives of approximately one million people in North America, South America, Africa, and Asia through financially sustainable health programs powered by ClickMedix technology. Ting was named World Summit Awards winner 2019, Young Entrepreneur of the Year 2018, and a Toyota Mother of Invention in 2015.

GIWPS: Do you feel that there are specific barriers that you face, being a woman working in a traditionally male-dominated field?

Ting: Certainly, for sure. I say not just being female but also being younger. I think it’s a combination of both. A lot of times, the initial perception is: you’re a woman; you’re probably not as technically savvy, whereas your male cofounder is your technical lead. That’s certainly the perception. And the barrier I face as a woman founder is I have to recognize and address it. There’s an initial perception barrier, and a subconscious communication barrier. By being young and female, a lot of times when I have conversations, the audience in the meeting might not look at me when they’re talking back. Instead, they’d look at my other colleagues, either an older female or a male. I think it’s subconscious, but I obviously see it. So that’s certainly a symptom of this barrier. 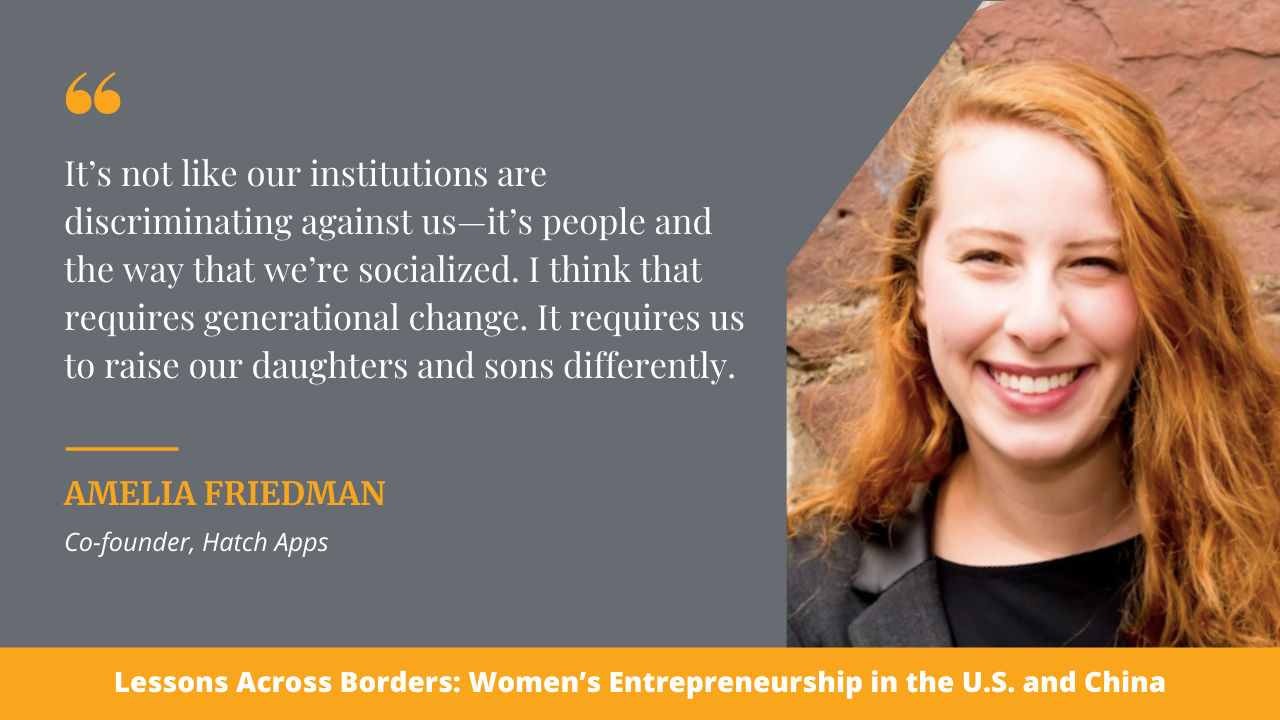 Amelia Friedman is a cofounder of Hatch Apps, a company that automates software development, making it possible for anybody to design and launch an app without coding. Amelia has been named to Washingtonian’s “Tech Titans” list, as a “Power Woman of DC Tech,” and to Forbes’ “30 Under 30” list. Prior to Hatch Apps, Amelia founded the Student Language Exchange, an education nonprofit she grew to operate in seven cities and for which she was awarded a Halcyon fellowship. An advocate for women in tech, Amelia helped to launch the Vinetta Project in DC. The organization now grants a $20,000 cash prize to a local female founder, engages with 150-plus founders and 100-plus investors annually, and has helped DC-area female-founded companies raise millions in seed-stage funding.

GIWPS: Do you think the legal, social, and economic environment in the United States is supportive for women entrepreneurs in tech specifically, and what changes have you seen since you started your company and until now? Where do you hope to see it evolve?

Amelia: Well, we know it hasn’t changed—the 2 percent number [share of venture capital invested in female-founded companies] has stayed the same for years. With a lot of issues, there’s a wave every few years of people being outraged, and then it passes and nothing changes. It’s not like our institutions are discriminating against us—it’s people and the way that we’re socialized. I think that requires generational change. It requires us to raise our daughters and sons differently. I also don’t feel like it’s just men that discriminate against women. I feel very strongly that sometimes women discriminate against women. 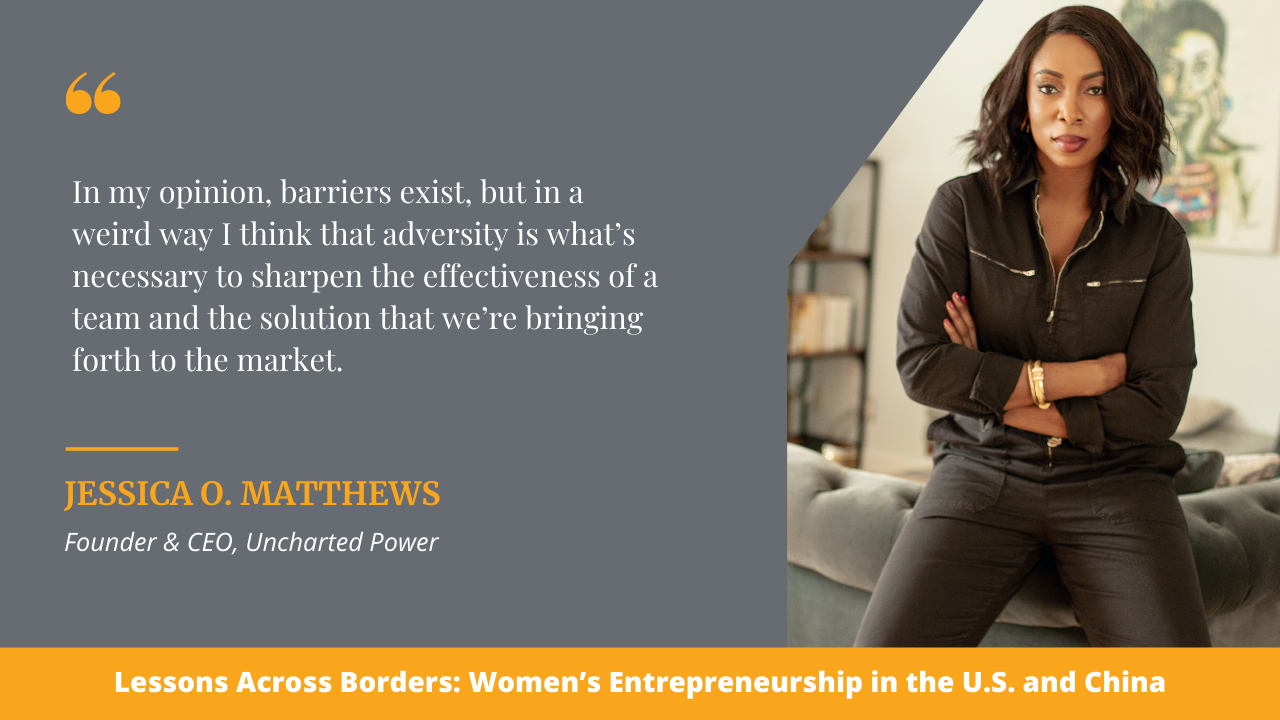 Jessica O. Matthews is the founder and CEO of Uncharted Power, an award-winning, full-service power and data infrastructure technology company that uses its patented suite of technologies to build, own, and operate power infrastructure and to provide communities with energy that is both clean and low-cost. The company was founded by Jessica when she was only 22 years old. She was invited by President Barack Obama to the White House to represent small companies for the signing of the America Invents Act in 2012. In 2016, she raised what was, at the time, the largest series A ever raised by a Black female founder in history, and was selected to ring the NASDAQ opening ceremony bell, representing all Forbes “30 under 30” alumna.

GIWPS: Do you feel that there are specific barriers that you face operating in a traditionally male-dominated field?

Jessica: Given the reality that we live in a world where race and social stratification still dictate much—as a Black female leader in this space, based in Harlem with a very diverse team and an allergy to being anything other than my authentic self—it would suggest that my path is not easy and obstacles do exist. In my personal opinion, however, it doesn’t mean that there is no point of entry. It’s something that you can go into saying, “Oh my gosh, look at all these mountains, look at all these obstacles” as it becomes exhausting. I believe it’s important for us to view these barriers as a competitive advantage. While there are quite a few barriers, the opportunity exists in the fact that you can present a new idea just because you’re coming from a new perspective. And that new perspective ends up being our competitive advantage. The way we at Uncharted Power built our team is an example of this. And the fact that it’s such a difference from the existing status quo offers us that confidence in knowing that we have something that will actually change and impact the world going forward. Infrastructure, both here and in developing and international nations, is an arduous task no matter your race or creed. In my opinion, barriers exist, but in a weird way I think that adversity is what’s necessary to sharpen the effectiveness of a team and the solution that we’re bringing forth to the market. 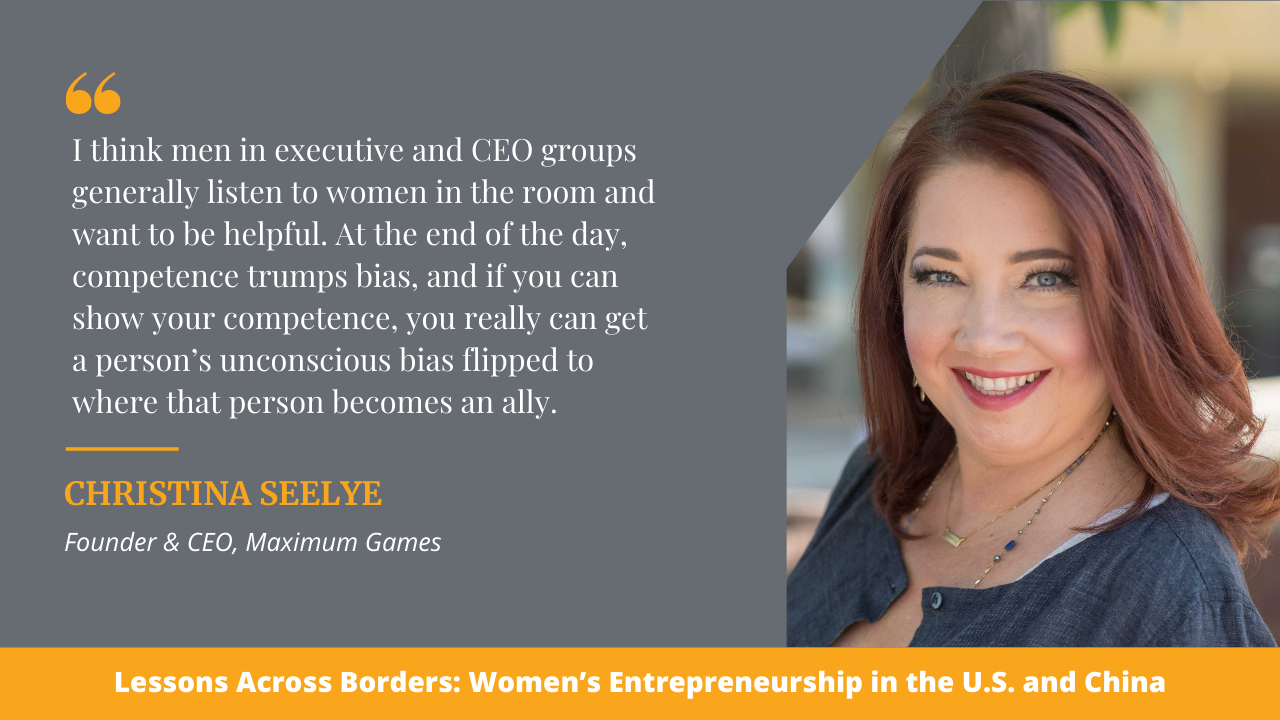 Christina Seelye is the founder and CEO of Maximum Games (MG), a global video-game publishing company founded in 2009. MG has become one of the top 20 video-game publishers in the world, as recognized by market researcher NPD. Named one of the “Fastest Growing Companies in America” by Inc. magazine and the San Francisco Business Times for five consecutive years, Maximum Games has also been recognized by the American Business Awards, Deloitte, and the Women Presidents’ Organization as one of the top-ranking privately held companies in America. Christina built and continues to expand her career as an entrepreneurial business leader by guiding early stage technology companies to rapid growth and market prominence through both organic development and strategic mergers and acquisitions.

GIWPS: In your experience, when you’re in networking settings, do you find that women entrepreneurs or executives are more helpful than men?

Christina: I don’t find women more or less helpful than men. I think men in executive and CEO groups generally listen to women in the room and want to be helpful. At the end of the day, competence trumps bias, and if you can show your competence, you really can get a person’s unconscious bias flipped to where that person becomes an ally. I think one of the challenges women have is that they tend to limit their networking to other women, and that leaves a lot of allies on the table who really want to support women.

Evelyn Garrity is a Program and Communications Associate at the Georgetown Institute for Women, Peace and Security.