United States of America’s Performance on the
Women, Peace, and Security Index

Compared to 25 Other Developed Countries

Years refer to the date of WPS Index publication; data is the most recently available at the time of publication.

Best and Worst States to be a Woman in America

State performance varied greatly in the United States, with top-ranking Massachusetts scoring more than four times better than bottom-ranking Louisiana. We found clear regional patterns in performance, with all 6 states in the northeast scoring among the 10 best nationally, while all 5 of the worst performing states were in the southeast. New Hampshire was the only state that scored in the top 40 percent of countries for all 12 indicators, while Alabama, Arkansas, and Louisiana scored in the bottom 40 percent across the board.
Explore Subnational Data 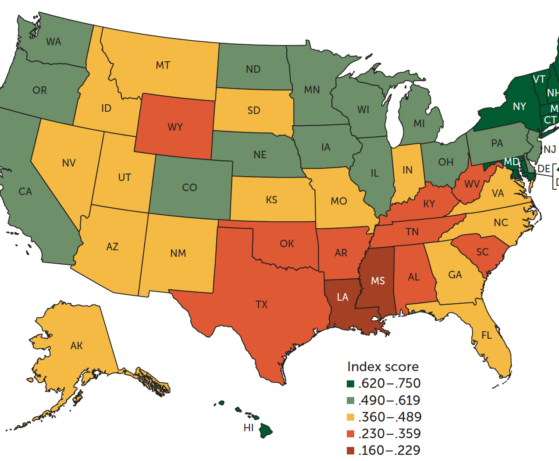 Women's Employment (%) 2017 data is not available for this country

Absence of Legal Discrimination Against Women