The Crisis in Tigray: Women & Girls Under Violent Assault

In November 2020, conflict broke out between the Ethiopian federal government and the leadership of Ethiopia’s northern Tigray region after years of tension. Eritrean armed forces and Amhara Regional Forces, both with longstanding grievances against Tigrayans, joined to back the Ethiopian government.

Alarming levels of violence against civilians appear to indicate the operations intend not only to wipe out the Tigrayan government, but also the people of Tigray. Global leaders have called it ethnic cleansing. Human rights violations and atrocities – including mass killings, rapes, lootings and weaponized aid – are rampant. Reports show Eritrean armed forces and Amhara Regional Forces are responsible for the worst abuses, though the UN Human Rights Office has named all actors, including the Ethiopian National Defense Forces, the Tigray People’s Liberation Front, and affiliated militia as culprits. Despite Ethiopia’s government announcing it had called a unilateral cease-fire in the region, fighting remains rampant.

Sexual violence is being used as a weapon of war against Tigrayan women and children – a grave violation of human rights that traumatizes the survivor, destabilizes entire communities and inflicts harm over generations.

The targeted violence and destruction have resulted in a massive humanitarian crisis with widespread displacement, severe shortages of food, water, and medical supplies. Escalating insecurity, lack of humanitarian access, and communications disruptions continue to worsen conditions. 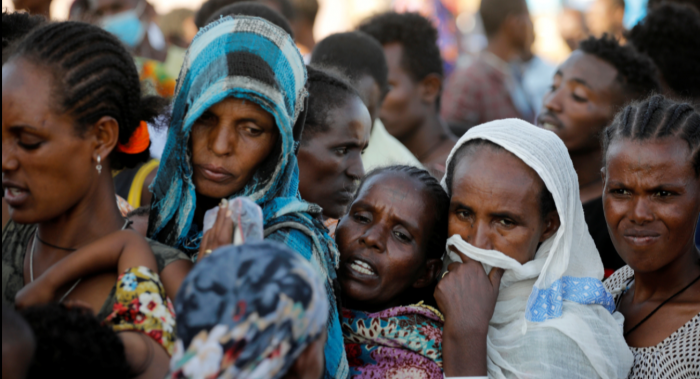 The human rights violations and atrocities in Tigray necessitate full implementation of obligations under UNSCR 1325 and UNSCR 1820 by the international community and Ethiopian government.

International humanitarian law (IHL) prohibits wartime rape and sexual violence and affirms the obligation of all conflict parties to protect women and girls.

The international community has taken important steps to address the crisis in Tigray:

“This crisis demands our attention and our action. It’s time for the Security Council to speak with one voice.”  —Linda Thomas-Greenfield, U.S. Ambassador to the United Nations

“When history looks back on this painful episode – as part of the long litany of battles fought on the bodies of women and girls, from Bosnia, to Rwanda, Iraq, Syria and elsewhere – we will rightly be asked what we did to honor our commitments.” —Pramila Patten, United Nations Special Representative of the Secretary-General on Sexual Violence

“Without prompt, impartial and transparent investigations and holding those responsible accountable, I fear violations will continue to be committed with impunity, and the situation will remain volatile for a long time to come.” —Michelle Bachelet, United Nations High Commissioner for Human Rights

“There is no doubt that sexual violence is being used in this conflict as a weapon of war.” —Mark Lowcock, United Nations Under-Secretary-General for Humanitarian Affairs and Emergency Relief Coordinator

Uphold UNSCR 1325 and fulfil international obligations to women and girls. The U.N. Security Council in particular must act urgently to uphold UNSCR 1325, which affirms the crucial role of women in preventing and resolving conflicts and in peacebuilding and the need to fully implement international humanitarian and human-rights law to protect the rights of women and girls during and after conflicts.

Utilize U.N. sanctions regimes to hold perpetrators accountable and address sexual violence perpetrated throughout Tigray. In 2018, GIWPS published an influential report calling on the U.N. Security Council to use sanctions––specifically the designation criteria and the subsequent listing of sanctioned individuals––to prevent and curb sexual violence in armed conflict and address the impunity of perpetrators.

Allow unhindered and unrestricted humanitarian access to the Tigrayan region to reach the millions of Tigrayans in need of emergency assistance, including survivors of SGBV.

Consider donor funding and support for SGBV as “life-saving” assistance. In many crisis settings, prevention and response programming for SGBV are not recognized as life-saving interventions. USAID and U.N. agencies must prioritize SGBV funding in Tigray, as well as invest in long-term funding mechanisms for a specialized SGBV response across the humanitarian sector.

Invest in grassroots efforts and work with local women’s organizations that have the unique ability to reach and empower women and girls within their own communities through flexible and rapid funding mechanisms like the Women’s Peace and Humanitarian Fund.

Advocate for a collective effort and sustained financial and political support from the entire international community to fully address the conflict. Advocacy efforts matter to ensure a united voice calling for action at all levels.

Reach out to other NGOs focused on SGBV and ask them to bring the plight of the women in Tigray to greater attention.

Use social media and other platforms to give voice to the untenable situation developing in Tigray and spotlight the disproportionate impact on women and girls. Omna Tigray, an advocacy organization founded in response to the humanitarian crisis in Tigray, provides infographic slide-decks, resources, and social media campaigns to support.

Georgetown alumna Bserat Ghebremicael (B’17) shares her perspective as a Tigrayan woman and describes her advocacy work with the nonprofit organization Omna Tigray.

Watch the recording of our conversation with leading policymakers and voices from Tigray about what can be done to counter the human rights violations and atrocities committed against women and girls.