The women of Afghanistan urgently need our help. Join the Protect Afghan Women campaign to make a donation or take action to support at-risk Afghan activists. ​Sign the petition to urge the US Government to evacuate at-risk women and their families. 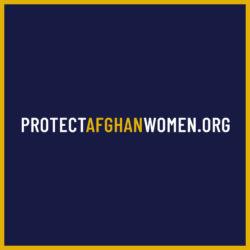 We are working to provide scholars and policymakers with tools to understand the perspectives of Afghan women and the implications of the current negotiations on regional and global stability.

Dr. Ayse Kadayifci-Orellana is developing a Toolkit on Islamic Sources of Peace, Democracy and Women’s Rights for Afghan Women Negotiators. The Taliban have used their extreme religious ideology to exclude women from access to education and full participation in their society. However, Islamic tradition offers a strong framework to build democratic and equitable institutions that respect human rights as well as women’s rights.

Dr. Jessica Smith explores how Everyday Peace Indicators (EPI) can be used to inform and strengthen Women, Peace and Security in Afghanistan. The project analyzes EPI datasets to investigate how locally defined indicators – and women and men’s local experiences of peace and security – relate to the four pillars of the WPS Agenda: prevention, protection, participation, and relief and recovery.

Our research team has also measured and ranked Afghan women’s inclusion in society, access to justice, and security through our Women, Peace and Security Index. We also published articles on how to advance women’s participation in Track II peace processes; and how to bridge women’s participation in Track I and Track II peace processes.

Together with our partners, GIWPS convenes key policymakers and stakeholders at strategic moments to produce concrete recommendations to advance women’s meaningful inclusion.

Over 100 global leaders and foreign policy experts emphatically stated that peace cannot be made on the backs of Afghan women. The statement—signed by 26 former presidents and prime ministers, and 34 foreign ministers including 5 former U.S. Secretaries of State—calls for Afghan women’s full participation in the intra-Afghan peace process. The statement was led by Secretary Madeleine Albright and coordinated by the Georgetown Institute for Women, Peace and Security. It received extensive media coverage, and, more importantly, reached key decision-makers.

Explore the video recordings and press releases from the high-level panel discussions we have organized featuring scholars, diplomats, and Afghan women leaders:

A Conversation with Ambassador Roya Rahmani

September 9, 2021: Afghanistan’s first female ambassador to the United States, Roya Rahmani, discussed the unfolding crisis in Afghanistan under Taliban rule, particularly as it impacts women and girls. She shared her views on events relating to the evacuation of at-risk women and their families as well as the future of those who remain in the country. She also shared possible interventions by the international community to safeguard women’s lives and rights.

Ambassador Roya Rahmani is currently a distinguished fellow at the Georgetown Institute for Women, Peace and Security. She previously served as Afghan ambassador to the United States and non-resident ambassador to Mexico, Argentina, Colombia, and the Dominican Republic.

March 19, 2021: The Permanent Missions of Afghanistan, the United Kingdom, and the United States, on behalf of the Group of Friends of Women in Afghanistan, with the Georgetown Institute for Women, Peace and Security, held a High Level Panel Discussion on International Support for Afghan Women’s Rights. Speakers included: H.E. Barbara Woodward, Ambassador and Permanent Representative of the United Kingdom to the UN; H.E. Elisabeth Millard, Acting ECOSOC Ambassador of the United States to the United Nations; H.E. Rula Ghani, First Lady of the Islamic Republic of Afghanistan; H.E. Eva-Maria Liimets, Minister of Foreign Affairs of the Republic of Estonia; H.E. Audun Halvorsen, State Secretary to the Minister of Foreign Affairs of Norway; H.R.H. the Countess of Wessex; H.E. Rosemary DiCarlo, ​Under-Secretary-General for Political and Peacebuilding Affairs, UN; H.E. Andreas von Brandt, Ambassador of the European Union to Afghanistan; Ms. Mary Akrami, Executive Director, of the Afghan Women’s Network (AWN); Ms. Shkula Zadran, Afghan Youth Representative to The United Nations; Ambassador Melanne Verveer, Executive Director, Georgetown Institute for Women, Peace and Security; H.E. Adela Raz, Ambassador and Permanent Representative of the Islamic Republic of Afghanistan to the UN.

The U.S.-Taliban Deal – One Year On

March 3, 2021: The Georgetown Institute for Women, Peace and Security and the Atlantic Council hosted an expert discussion on the state of the Afghan peace process on March 3, 2021. Panelists included Amb. James Cunningham, Former U.S. Ambassador to Afghanistan and Nonresident Senior Fellow at the Atlantic Council’s South Asia Center; Amb. Franz-Michael Skjold Mellbin, Former EU Special Representative for Afghanistan and Pakistan; Fatima Gailani, Member of The Negotiating Team of the Islamic Republic of Afghanistan; and Ghizaal Haress, Ombudsperson for the Islamic Republic of Afghanistan.

A Critical Moment for Afghan Women

March 10, 2020: The Group of Friends of Women in Afghanistan, led by Afghanistan and the United Kingdom, and the Georgetown Institute for Women, Peace, and Security held an interactive discussion on the Afghan Peace Process at the United Nations. Distinguished speakers included Former Secretary Hillary Rodham Clinton.

It is essential that stakeholders hear directly from Afghan women regarding their needs and strategies for protecting their rights.

Peacebuilders Mary Akrami (Afghan Women’s Network) and Palwasha Hassan (Afghan Women’s Educational Center) spoke out about misconceptions about Afghan women in an interview with with GIWPS Research Assistant Hareem Fatima. Learn more about their views on religion, women’s rights, and the peace talks with the Taliban via the GIWPS blog.

We asked Afghan women leaders from government and civil society about the state of the peace negotiations and the role of the international community in Afghanistan’s future. Find their answers to the most “frequently asked questions” about the Afghan peace process on the GIWPS blog.

GIWPS Executive Director Amb. Melanne Verveer recently interviewed 27-year-old Afghan activist Muqadasa Ahmadzai, featured above, on our Seeking Peace podcast. Muqadasa tells us about the network of women activists she leads, their involvement in peace-building activities, and how they are fighting disinformation about COVID-19 in Taliban strongholds.

We speak to national and international press about our original research on Afghanistan and the need for an inclusive peace process.

WTOP News: ‘We left them behind’: March near White House calls on US to prioritize women leaders in Afghan evacuations

National Geographic: These women fled Afghanistan. What’s at stake for those left behind?

USA Today: As Harris travels to Asia, activists push her to speak out for women fleeing Taliban in Afghanistan

New York Times: How to Help Afghan Refugees and the Relief Effort

NPR: What Women’s Advocacy Groups Worldwide Are Doing For Women In Afghanistan

New York Times: What Do Sweden and Mexico Have in Common? A Feminist Foreign Policy

Forbes: Women, Peace And Security – Challenges And Opportunities In Light Of The Corona Pandemic

Forbes: Men, Women And The Changing Shape Of Military Muscle

Foreign Policy Magazine: With the Women, Peace, and Security Act, Washington Could Be a Model for the World

Center for Strategic and International Studies: Setting Conditions for the Right Outcome in Afghanistan

The Hill: Afghan Women are Essential for Peace

Voice of America: Interview with Melanne Verveer about the Doha Talks One Year On

National Geographic: The Best And Worst Countries for Women

Atlantic Council: Women must be meaningfully included in the Afghan peace negotiations

NATO: Strength is in gender diversity and equality

Asia Foundation: No Country Can Get Ahead That Leaves Half its People Behind

IRC: Next steps in the drive for gender equality in crisis settings: How a feminist approach can help